3D rendering: Bitcoin cryptocurrency coin with the national flag of Brazil, on a black background

Brazilian lawmakers have passed a new regulatory framework for the trading and use of Crypto. Brazil did not designate Bitcoin as a legal tender, but it did the next best thing: It passed a law legalizing cryptocurrencies as a means of payment throughout the country, giving a regulatory boost to the adoption of digital currencies and the expansion of the ecosystem.

As part of the vote that took place yesterday (Tuesday) in Brasilia, the capital of Brazil, Cryptocoin Bitcoin will be recognized as a digital representation of value that can be used as a means of payment and as an investment asset in the South American powerhouse.

The document, signed PL 4401/2021, includes virtual currencies and frequent traveler rewards from airlines (the popular “miles”) in the definition of “payment agreements” under the supervision of the country’s central bank.

The law refers to the entire sector as “virtual assets” and is now awaiting the signature of the new president, Luiz Incio Lula de Silva, who will approve the new law.

However, it is important to differentiate: The bill does not make Bitcoin a legal tender in the country, but a means of payment. 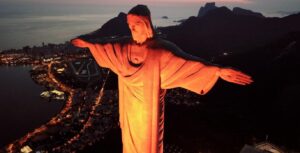 Bitcoin and other assets being used for payments

Money that is legal tender means that the state will accept tax payments with it and will force (mostly) the business owners in the country to accept payment with it. A payment method means that the option to use it as payment is available.

Brazil has made significant progress in terms of regulation and adoption of cryptocurrencies among investors.  The expectation is that Brazil’s central bank will be trusted to oversee Bitcoin as a means of payment, while the local securities authority will be trusted with aspects of crypto as an investment asset.

Brazil has the largest number of cryptocurrency ETFs in Latin America, and most of the country’s major banks and brokers currently offer some type of exposure to cryptocurrency investments or similar services such as custody or token offerings. Even Itaú, one of Brazil’s largest private banks, is working to tokenize assets as part of its future investor services package.

One of the most important aspects of the regulation is the requirement for service providers to separate their own funds from those of their clients in order to avoid a situation similar to FTX, in which the exchange used its clients’ funds for its own financial operations.

The law avoided a provision that granted tax advantages to cryptocurrency miners and also acknowledged that digital currencies facilitated criminal operations due to their pseudonymous nature, requiring “closer monitoring” of the industry.

However, the law prevented tax breaks for bitcoin miners and also calls for closer oversight of the criminal aspects of the field.